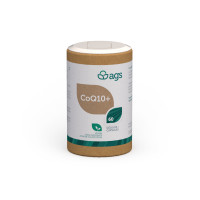 What is coenzyme Q10? Coenzyme Q10 or ubiquinone is found naturally in all cells of the body, specifically in the mitochondria. It is a substance similar to a vitamin. In humans, unlike animals, ubiquinone is synthesized with only 10 units of isoprene, hence Q10. It is synthesized in the body from mevalonic acid and derivatives of tyrosine and phenylalanine. However, this amount is not always sufficient and continues to decrease with age. This fall is the cause of aging. When a cell needs energy, it converts fats, proteins, carbohydrates and alcohol into ATP (adenosine triphosphate) which stores this energy in chemical form. The cell breaks down the ATP molecule and releases energy. The whole process takes place inside the cell, in the mitochondria, which are considered the powerhouses of the cell. Muscle cells especially expend large amounts of energy, so they contain much more mitochondria than in other types of cells. For example, heart muscle, which has a high energy demand, contains a large number of mitochondria and therefore needs more Q10. Metabolic functions Coenzyme Q10 is a metabolic agent. CoQ10 + has strong antioxidant activity and has the ability to influence cellular redox reactions. Ubiquinone is integrated into the electron transfer chain in the mitochondrial apparatus (from complexes of succinate dehydrogenase and NADH dehydrogenase) with increased production of ATP, which is of great importance for the exchange of energy and substances in the body. CoQ10 + optimizes the process of oxidative phosphorylation, improving the supply of energy to cells. Powerful antioxidant: CoQ10 + is able to regenerate the bioactive form of vitamin E and vitamin C, which helps reduce the number of free radicals. Thanks to the neutralization of free radicals, it protects the cell membrane and DNA from damage by free radicals. Participates in the regulation of fat metabolism. Ubiquinone is involved in the production of red blood cells, other blood cells and positively affects the function of the thymus gland. It has a positive effect on the functioning of the immune system, slows down the aging process at the cellular level. Participates in the process of contraction of skeletal muscles and the heart. CoQ10 +, an optimized and biologically active coenzyme Q10! CoQ10 + is a dietary supplement designed to meet a growing demand for a reliable, biologically active source of coenzyme Q10. This is because coenzyme Q10 has several cofactors that complement its potent action. Among these cofactors riboflavin and nicotinamide. Riboflavin is the precursor of FADH2 and nicotinamide a precursor of NADH, two elements of the Krebs cycle that store and transport electrons that will be used to produce Krebs cycle ATP to the electron transport chain in the mitochondria. The molecule that receives these electrons is coenzyme Q10. Hence the importance of combining these two molecules with coenzyme Q10. Also, vitamin B1 (thiamine) is very important in the process of ATP production. It also helps protect DNA against breaks produced by oxidative stress by complementing the function of CoQ10. And in order to boost the antioxidant effect of CoQ10 +, liposomal vitamin C represents the best element given its very high bioavailability and bioactivity. Scientific studies show that the combination of vitamin C and CoQ10 improves the absorption of the latter at the intestinal, cellular and mitochondrial levels! Studies also show that the combination of polyphenols (blackcurrant extract and currant extract) with CoQ10 optimizes its antioxidant effect in several pathologies. CoQ10 + integrates all of these elements at optimal scientifically studied dosages.

1 capsule per day with a meal (morning or noon) or as advised by your healthcare professional.

Do not exceed the recommended daily dose Keep out of reach of children This food supplement does not replace a varied and balanced diet, nor a healthy lifestyle.