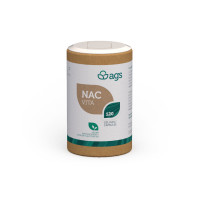 NAC Vita, from ESE Group laboratories, is a food supplement that combines the synergy between NAC, the most direct precursor of glutathione, and Vitamin C, making it a powerful antioxidant, detoxifier, antimicrobial, mucolytic and anti-inflammatory!

N-acetyl-L-cysteine ​​(NAC) is an acetylated form of an amino acid - cysteine. It has been shown to be very effective as an antioxidant, detoxifier, antimicrobial, mucolytic and anti-inflammatory. In fact, since the end of the 1980s, NAC has been used as an antioxidant which has both a direct antioxidant effect due to the presence of a free thiol group, and indirect due to the fact that it is the precursor the most direct of glutathione. Mucolytic effect Being a derivative of the amino acid cysteine, it is a sulfur molecule. The sulfur it contains allows a mucolytic effect and facilitates the discharge of sputum. The mucolytic effect is due to its ability to break the disulfide bonds of the mucopolysaccharide chains that make up the bronchopulmonary mucus and to cause depolymerization of mucoproteins in bronchial sputum. Antioxidant effect NAC has an antioxidant effect based on the ability of its reactive sulfhydryl groups (SH groups) to bind to free radicals, thus neutralizing them. It also promotes the synthesis of glutathione, the body's most important intracellular antioxidant! In fact, glutathione is a tripeptide made up of cysteine, glycine and glutamate. NAC is therefore a very powerful direct precursor of glutathione because it increases its synthesis much more than any other precursor. While glutamate and glycine are found in sufficient quantities on our plates, this is not the case with cysteine, which, already little present, deteriorates considerably when food is cooked. This severely limits the natural production of glutathione and leads to significant deficiencies in Europeans. In addition, over the years, tobacco, alcohol, medication, intensive physical activity, and certain chronic diseases such as diabetes and degenerative diseases, the levels of glutathione in the body tend to decrease. Supplementation is therefore essential for anyone who requires an increase in glutathione levels. Antimicrobial effect In addition to antioxidant activity, recent experimental results have confirmed the effectiveness of NAC in disaggregating and reducing the number of viable forms of bacteria present in biofilms, such as Staphylococcus aureus and Escherichia coli. The activity exerted by NAC, even when used in synergistic combination with single antibiotics, opens up important new therapeutic prospects for chronic infectious pathologies of the respiratory tract and urinary tract caused by biofilm microorganisms, which are almost impossible to eradicate with general antibiotic therapy. The strong antioxidant activity of NAC and its ability to inhibit the formation of bacterial biofilms and destroy the polymer membrane of bacterial and fungal biofilms, make microbes sensitive to antibiotics. In this sense, NAC is used to destroy bacterial biofilms in the bladder, the main cause of chronic cystitis. Antitoxic effect NAC activates the synthesis of glutathione, which is an important factor in liver detoxification. Indeed, the most important class of enzyme in the detoxification process is glutathione-S-transferase. The latter is a glutathione and sulfur enzyme. NAC, being a direct precursor of glutathione and containing sulfur, stimulates this enzyme, and therefore, the hepatic detoxification pathway, thus eliminating all kinds of toxins in the body. This is the reason why NAC has pronounced non-specific antitoxic activity. Its use is just as effective, for example, in eliminating “hangover” syndrome caused by excessive alcohol consumption as it is in the treatment of serious and potentially fatal poisonings. It combines the properties of both a non-specific toxicotropic antidote (entering into physicochemical interactions with toxic substances in the body by chelating them) and a toxicokinetic antidote (affecting the rate of degradation of toxic molecules). NAC can be used in patients with acute poisoning from aldehydes, phenols and other chemicals. It has an antitoxic effect against a wide range of various toxic substances, especially acrolein found in cigarette smoke, car exhausts and fried foods, and formed in the body during the treatment of patients with certain cancers ( cyclophosphamide). It is also a reference antidote against acute paracetamol poisoning. Therefore, NAC is considered in the world medical literature to be one of the most widely used antitoxic agents. Other effects Studies are underway on therapeutic effect of schizophrenia, bipolar disorder, obsessive-compulsive disorder, AIDS, polycystic ovary syndrome and other diseases. In experiments on old mice, it was found that a mixture of NAC with glycine can have a goprotective and anti-aging effect, protecting against cardiovascular disease. In male infertility, NAC has been shown to liquefy sperm, which improves sperm quality, and some studies mention NAC as a potential cure for idiopathic oligospermia. Synergy of NAC and Vitamin C NAC Vita combines NAC and Vitamin C for a synergistic combination. This results in a multiplied antioxidant result! NAC Vita, from ESE Group laboratories, is a food supplement that combines the synergy between NAC, the most direct precursor of glutathione, and Vitamin C, making it a powerful antioxidant, detoxifier, antimicrobial, mucolytic and anti-inflammatory! NAC Vita is excipient-free & Vegan. It is composed only of concentrated 100% natural ingredients and is free from any unnecessary and harmful excipients. The dosage of 299 mg per capsule of NAC allows you to take smaller doses but closer together during the day to keep a good level of glutathione. An AGS exclusive.

Adults: 2 capsules per day without meals.

Contraindicated in case of dry cough. Do not administer to children under 12 years old.

Inform your doctor or pharmacist if you are taking medication at the same time. Food supplements are not a substitute for a varied and balanced diet or a healthy lifestyle. Keep out of the reach of children. Do not exceed the recommended daily dose.