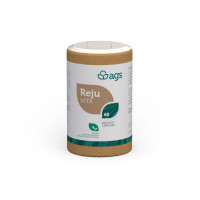 Reju'vita; is the only food supplement on the world market that combines PQQ with its direct cofactors (CoQ10, alpha-lipoic acid, NADH and astaxanthin) to multiply its ultra-beneficial effects on the metabolism of mitochondria!

2 capsules per day during meals containing good fats or as advised by your healthcare professional.

This dietary supplement should be consumed by adults only, excluding pregnant and breastfeeding women.